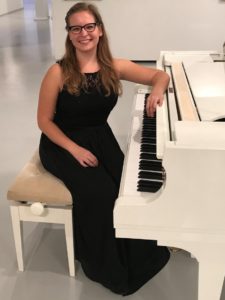 Lili Ahopelto is a Helsinki-based pianist currently studying in the Masters program in Classical Piano Performance at the Sibelius Academy with Erik Tawaststjerna and Antti Hotti. She has a Bachelor’s Degree in Piano Performance from the University of Toronto, where she studied under the tutelage of Emily Chiang.
As an active soloist and chamber musician, Lili has participated and performed in the Savonlinna Music Academy in Finland, Orford Music Festival in Quebec and Tuckamore Chamber Music Festival in Newfoundland.
Lili has won numerous awards and scholarships. Most recently, she was a top prizewinner in the 2019 Sibelius Academy Helmi Vesa Piano Competition. She has been awarded scholarships from the Woodstock Rotary Festival of Music and Kiwanis festivals in London, Stratford and Toronto. She has also participated four times in the Ontario Music Festivals Association (OMFA) Provincials Competition and received Third Place in 2017. She has also earned several awards for academic excellence from the University of Toronto.
Lili is a versatile musician with a wide scope of musical interests. In addition to piano, she is an accomplished accordionist and is concurrently pursuing minor studies in folk music at the Sibelius Academy.
Embracing her Finnish heritage, Lili has regularly performed for the Finnish community in Canada. She has performed on both piano and accordion at events such as the Finnish Grand Festival at Mel Lastman Square, the Unique Lives Finnish Independence Day Celebration at the Women’s Art Association of Canada, the Suomi 100 Centennial concert at the Toronto Centre for the Arts and the Suomi 100 Gala Dinner and Concert at Casa Loma. She has collaborated as a soloist with Finnish choirs Vox Finlandiae, Agricola Singers and the Toronto Finnish Male Choir, as well as collaborations with other renowned Finnish artists.
At the 2018 FinnGrandFestival, Lili was presented with a silver medal from the Finnish Canadian Cultural Federation for her long-standing work in preserving Finnish culture and maintaining relations between expatriate Finns and the homeland. 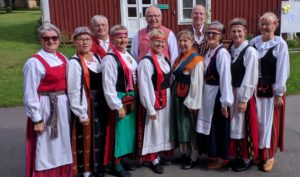 Kasareikka has been in existence since 1962 in Stockholm, Sweden. The dance group has travelled extensively throughout the world, last trip was in 2016 to Brazil. This trip to Canada will be our 4th, our first one having been in 2000. The dance group has 20 members.
Kasareikka is Stockholm’s Finnish Organizations folkdance group. The Organization celebrated 125 years this year, and is thought to be the world’s second oldest. 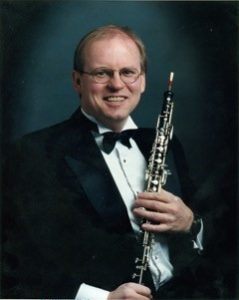 Seppo Haapamaki
Born and raised in Sudbury, Ontario, Seppo Olavi Haapamaki discovered his deep affection for music at age nine, when he assembled a band with two classmates and gave a presentation to their grade four class. He never imagined that this childhood endeavour would develop into a lifelong passion for ensemble work.
Seppo studied accordion at the Karl Pukara Music Studio and achieved Grade 10 level in performance from the Royal Conservatory of Music. Taught by Iona Reed Pukara, Lorraine (Lazarenko) Santala and Ruth Johnson, Seppo competed in annual Kiwanis Music Festivals and at national and international competitions, most notably, the North American Accordion Federation of Music championships held in Los Angeles in 1973.
As a teenager, Seppo entertained Sudbury’s Finnish community at Suomi Ranta Hall and Sampo Hall, and he was also a member of the popular local rock band Apollo with Kari Kamarainen on guitar, Floyd Gibson on bass and Dave Gustafson on drums. Their initial lead vocalist was Liisa Lehto, followed by Erkki Kinos.
Seppo earned his Bachelor of Engineering degree from Laurentian University in 1980. His love for music and playing the accordion and oboe have followed him to every community his mining career has taken him.
For many years, he performed with the Sudbury Philharmonic and Sudbury Symphony Orchestra. Currently residing in Timmins, Ontario, Seppo is employed as Senior Mine Engineer at the Young-Davidson Mine in Matatchewan. He is principal oboist for the Timmins Symphony Orchestra and he also enjoys helping with music worship at St. Paul’s Emmanuel Community Church in nearby Englehart.
Suomi Fest 2020 welcomes Seppo home to entertain Sudbury audiences once again. 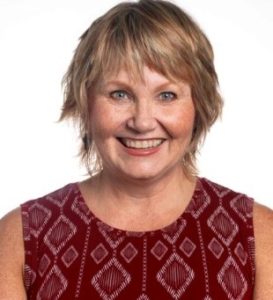 Gail Hakala is very proud of her Finnish heritage. She is also very grateful to the Finnish community that has supported her illustrious music and theatre career over the years. The Finnish people have always been her rock.
Gail is an accomplished singer, actor, adjudicator and teacher who has performed from coast to coast in all major theatres across Canada.
Her full-time performance career took a hiatus when she was approached to teach at the world-renowned Honours Bachelor of Music Theatre Performance Program at Sheridan College in Toronto. Gail is currently the Head of the Music Theatre and Vocal Department.
Her time and experience at Sheridan have been extremely rewarding but it is soon time to retire and allow the younger generation of instructors to take the program to yet another level. This will allow her to get back to her performance roots.
Gail plans on taking on a few shows, teaching at home, adjudicating festivals, conducting masterclasses and seeing even more of the world.
Suomi Fest Sudbury 2020 is excited that Gail will share her love of music during the 80th anniversary of the Finnish Canadian Grand Festival. 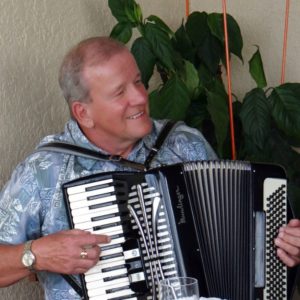 Karl Vainio is an accomplished musician whose love for the accordion stems from his Finnish heritage.
When he was two years old, Karl and his family emigrated to Canada from Finland, settling in Sudbury, Ontario. He grew up listening to his parents’ vast collection of record albums from the old country. He also listened faithfully to local radio show, Finn Hour. By age 11, Karl was totally enamored with accordion music and in 1959 told his dad he wanted to learn how to play the instrument. The very next day he was signed up for lessons at Prom Music Studio in downtown Sudbury. Renowned accordionist Karl Pukara taught him for seven years.
Young Karl also played in the Karl Pukara Music Studio orchestra, which performed local concerts and participated in national accordion competitions. For many years, he also competed as a soloist in the annual Kiwanis Music Festival.
As a teenager, Karl enjoyed the opportunity to perform live with fellow accordionist Hannu Lambert on Finn Hour, and on the annual live-televised Children’s Christmas Telethon. Karl later formed a band called Rytmi Pojat. The group remained together for about seven years, travelling throughout Ontario entertaining audiences with their repertoire of Finnish songs.
Karl’s lifelong passion for the accordion and his Finnish roots remains strong, and he looks forward to performing at Suomi Fest 2020.